Ed Small, the President of Smart Hotels, has been eyeing Providence’s College Hill for the past decade. Now, the Shaker Heights, Ohio developer is moving forward with an ambitious plan to build a 6-story hotel with 130 rooms hotel in the busiest area of College Hill.

Small told GoLocal, “This is a boutique hotel —  we mean it is custom design and at a scale that is intimate to the neighborhood.”

The six-story building is tall for College Hill but if constructed will be dwarfed by the East Side’s most questionable piece of architecture — the Brown University Science Library.

“Our hotels are different. They are not large meeting spaces or for conferences. They are built in a pedestrian context with an emphasis on personal service,” said Small.

“We want to have a neighborhood hotel and be a great fit for the area,” said Small. He stressed his commitment to preservation and outlined numerous professional efforts.

Smart discussed the companies strategy of being aligned with the “architectural fabric.”

The project — first reported by GoLocal this week — is proposed for the corner of Brook and Angell Street.

“We have an approach that is well suited for College Hill,” said Small. 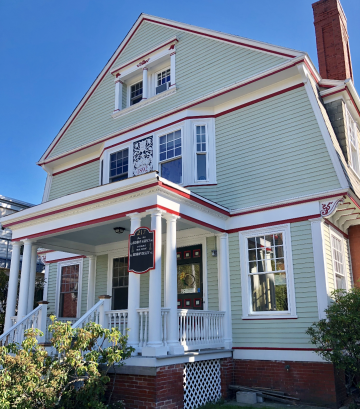 Three houses would be torn down as part of this hotel project, including 209, 211 and 217 Angell Street.

The three properties are controlled by East Side developer and realtor Ed Bishop. The grandest of the three homes is the 1890 structure at 209 which is accessed by the City of Providence for $922,500. The three structures combined are assessed at a  value in excess of over $2 million.

The addition of a hotel on College Hill that brings as many as 100 or more additional autos to the already congested area is frightening for residents.

Brent Runyon of the Providence Preservation Society said that after the GoLocal article he organization was contacted by many area residents and their number one concern is parking.

Smart says that most guests at his properties don’t bring cars. “They come by planes and trains via Uber,” said Small. He emphasized that the hotel’s guests and its proximity to Brown make this a pedestrian experience.

Small says that guests to the property will only be able to park via the property’s valets, but with 130 guests and staff, the demand could be significant.

The development team is seeking a variance for the parking requirements that the zoning ordinance. Smart Hotels is only offering a total of 44 surface and covered parking spots for the proposed hotel.

According to the application to the city, “A lower level basement will be accessed via Fones Alley and will provide 40 valet parking spaces as well as other hotel support spaces. Four additional valet surface parking spaces are at grade accessed off Angell Street.”

Small and his team claim with the application that, “To provide additional parking on-site is cost-prohibitive and would not allow [the] applicant to enjoy the permitted use thus amounting to more than a mere inconvenience.” 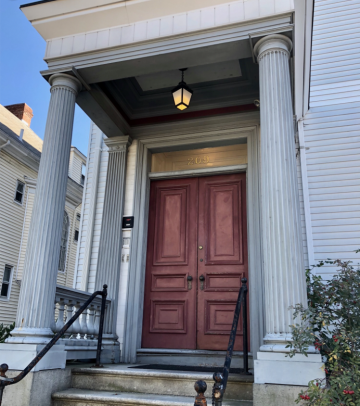 1890 home at 207 Angell would be demolished for the project

Big Impact on Other Hotels

The Smart Hotel project appears to have a winning formula, but may have a significant impact on other area hotels.

If the Smart hotel project is approved with 130 guest rooms and anticipated 78 percent occupancy, the project will take more than 37,000 hotel nights away from the city’s other hotels — hotel guests primarily of affluent Ivy League parents — and shift restaurant spending from downtown and Federal Hill to the East Side.

“We embrace the public process and we do believe that a neighborhood that cares about itself and we can engage with — we are not the usual developers and we appreciate making things complimentary,” said Small.

The company’s first public review of the project will be at the College Hill Neighborhood Association Meeting scheduled for Monday.

“CHNA is looking forward to reviewing the proposal from the developer and hearing feedback from the community at our meeting on Monday, Oct 7 at 7 pm at Lippitt House Museum at 199 Hope Street. Some things we will be looking at include the scale, height, design and materials of the new construction, the houses proposed for demolition, and the potential impact on traffic, congestion and parking,” said Josh Eisen, President of CHNA.